On Behalf of the University Consortium for Adaptive Disorder and Head pain (UCADH) and the Casimiro Mondino Foundation of Pavia, Italy, the Cluster Headache.
Award is given yearly to a research group which, following the tradition of the Headache Centre over the last three decades, has given a relevant contribution in the field of cluster headache.
The prize is acknowledged on the basis of a peer reviewed manuscript published the previous year. 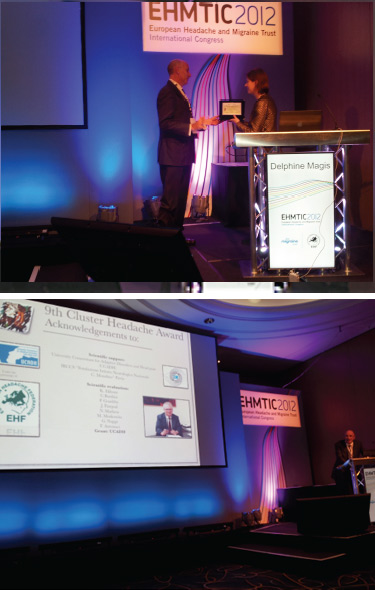 The winner of the 9th Edition (year 2012) has been the paper: "Central modulation in Cluster Headache patients treated with occipital nerve stimulation: an FDG-PET Study" written by Magis D, Bruno MA, Fumal A, Gérardy PY, Hustinx R, Laureys S, Schoenen J. and appeared in: BMC Neurol. 2011 Feb 24;11:25 The prize has been delivered to Dr Delphine Magis by Prof. F. Antonaci during the award section at the III European Headache and Migraine Trust International Congress 2012 held in London, UK (September 23, 2012).

It is well known that drug-resistant chronic cluster headache (drCCH) is a desperate condition. Various neurostimulation procedures have recently provided encouraging results in drCCH, among them percutaneous occipital nerve stimulation (ONS). The mode of action of
ONS in drCCH remains elusive. The long delay to significant improvement suggests involvement of slow neuromodulating processes. In order to better understand the central mode of action of ONS authors used 18-FDG positron emission tomography (PET) to study the
metabolism of CNS areas involved in cluster headache pathophysiology and pain processing/control. The results showed that 10 of 15 drCCH patients treated with ONS accepted to undergo 18-FDG-PET at several time points varying between 0 and 30 months after electrode implantation. After 6-30 months ONS, 7 patients responded i.e. were pain free or had a ≥ 90% reduction of attack frequency. In all patients, compared to healthy volunteers, several areas were hypermetabolic before ONS: the cingulate cortex, cerebellum, ipsilateral hypothalamus and pulvinar, midbrain and ipsilateral lower pons. All normalized after ONS, except the hypothalamus. Switching the stimulator ON or OFF had little influence on brain glucose metabolism. The perigenual anterior cingulate cortex (PACC) was the only
area that was more active in ONS responders than in nonresponders.
That ONS is nothing but a symptomatic treatment is illustrated by the persistent hypothalamic hypermetabolism. The lack of short-term changes supports the hypothesis that ONS acts in drCCH through slow neuromodulatory processes. Selective activation in
responders of PACC, a pivotal structure in the top-down endogenous opioid system, suggests that ONS might restore balance within dysfunctioning pain control centres.
At the last Executive Committee meeting of the European Headache Federation the past president F.A. proposed the the patronage of the EHF from 2013 award edition and it has been approved unanimously.
The General Secretary of the Award announced that on behalf of the Pavia Headache Centre the 2013 edition should honou the fundamental contribution to the defining of cluster headache of Prof. Giuseppe Nappi. His team of coworkers are proud to recognise how he has influenced, with his unrelenting activity and will continue to influence, the clinical and research activity in cluster headache. Therefore, the 2013 Edition will be named: "Nappi Cluster Headache Award"