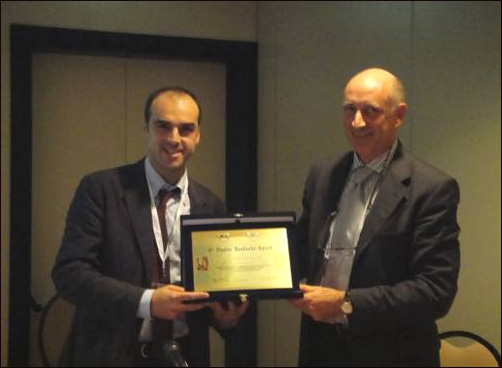 The Scientific Committee has selected and scored 38 manuscripts on Cluster headache published in 2008. The winner of the 6nd Edition (year 2009) is the paper: “Reduced habituation of trigeminal reflexes in patients with episodic cluster headache during cluster period “Written by Perrotta A, Serrao M, Sandrini G, Bogdanova D, Tassorelli C, Bartolo M, Coppola G, Pierelli F, Nappi G. and appeared in: Cephalalgia. 2008 Sep 28;(9): 950-9.
The pathogenesis of cluster headache (CH) is still not completely understood, even though a growing body of evidence supports the pivotal role of the hypothalamus. On the basis of animal studies, it has been suggested that a hypothalamic dysfunction can lead to a habituation deficit of brainstem reflex responses, as result of a stress-like condition. During the interictal period a deficient habituation of the R2 component of the blink reflex has been clearly demonstrated in migraineurs.
Taking into account these findings, we tested the hypothesis that habituation of brainstem reflexes may be impaired in CH patients and, in order to look for evidence of possible differential impairment of habituation mechanisms, we compared the results with those of an additional group of subjects affected by migraine without aura.
The habituation phenomenon of the late components (R2 and R3) of the blink reflex was studied in 27 CH patients during the cluster period, in 22 migraine patients interictally and in 20 control subjects. A significant habituation deficit in the R2and R3 components was found in CH compared with both controls and migraineurs.
The lack of habituation in CH, more pronounced than in migraine, points to abnormal processing of sensory stimuli at the trigeminal level that could be driven by hypothalamic dysfunction during the cluster period.
The prize has be delivered to the authors during the award section at the Italian Society for the Study of Headache (SISC) meeting in Bari (3rd October 2009). MSD Italy has kindly sponsored the Award.