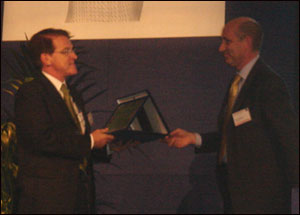 The winner of the 3rd Edition (year 2006) is the following paper:
Hypothalamic stimulation in chronic cluster headache: a pilot study of efficacy and mode of action.
Written by: Schoenen J, Di Clemente L, Vandenheede M, Fumal A, De Pasqua V, Mouchamps M, Remacle JM, de Noordhout AM.
Appeared in Brain. 2005 Apr;128(Pt 4):940-7
Authors have reported the results of a pilot study of hypothalamic deep brain stimulation (DBS) in 6 patients suffering from refractory chronic cluster headache. The stereotactic coordinates were those published by Leone et al.(2001). In one patient the implantation procedure had to be interrupted because of a panic attack with autonomic disturbances. Among the 5 implanted patients, 3 had excellent relief : 2 are pain-free, 1 has less than 3 attacks/ month. One patient had only transient remissions during 2 years, after which he went into remission which lasts since 7 months. Mean voltage was 3.5V, diplopia being the major factor limiting its increase. In a patient with total remission, attacks resumed 3 months after turning off the stimulator. After 1 month, the hypothalamic stimulation induced resistance against the attack-triggering agent nitroglycerin and tended to increase pain thresholds at extracephalic, but not at cephalic, sites. It had no detectable effect on neurohypophyseal hormones or melatonin excretion.

Unfortunately, 1patient died from an intracerebral haemorrhage that developed along the lead tract several hours after surgery. We decided therefore to switch to a pilot study of occipital nerve stimulation (ONS). Short term results were disappointing with ONS, but after a longer follow-up of >4mths the therapeutic effect was comparable to that of DBS. Four out of 5 patients achieved subtotal remission; the 5th patients decided to interrupt treatment after 2 months because of lack of efficacy.

This year the prize amounts to € 2500,00 and has been awarded by the Award Secretary (F. Antonaci MD, Phd ) to Jean Schoenen (Depts of Neurology and Preclinical Sciences. Liège University. Belgium) during the award section during the Migraine Trust International Symposium in London -20th September 2006). GSK Italy has kindly sponsored the Award.