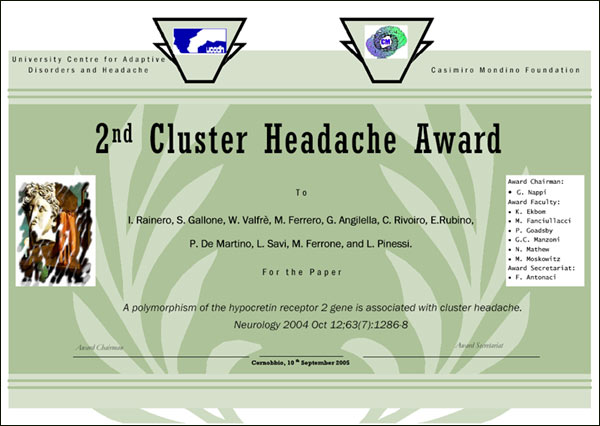 The Scientific Committee has selected and scored 43 manuscripts on Cluster headache published in 2004. The Winner of the second edition has been the article: A polymorphism of the hypocretin receptor 2 gene is associated with cluster hea-dache. Neurology 2004 Oct 12;63(7):1286-8, written by I. Rainero, S. Gallone, W. Valfrè, M. Ferrero, G. Angilella,C. Rivoiro, E.Rubino, P. De Martino, L. Savi, M. Ferrone, and L. Pinessi. It is known that a certain number of recent epidemiological surveys indicate a significant genetic component to cluster headache predisposition. To date, however, no clear molecular genetic clues have been identified yet.
The Authors genotyped for several polymorphisms of the orexin/hypocretin pathway genes a group of Italian cluster hea-dache patients and healthy controls. The hypocretins are recently discovered neuropeptides that are selectively expressed in the po-stero-lateral hypothalamus, a key region in the pathogenesis of the disease. A strong association between an e-xonic polymorphism of the hypocretin receptor 2 (HCRTR2) gene and cluster headache was found. This paper has shown the first evidence of an association between a DNA polymorphism and the disease. The Authors have shown that genetic variations within the HCRTR2 gene influence the risk for cluster headache and suggests new strategies for a better understanding of the pathophysiological mechanisms of this excruciating headache.

The recipient has presented a summary of his research during the Annual Meeting Of the Italian Neurological Society, in Cernobbio (10th October 2005). This year the prize amounts to € 2500,00 and has been awarded by the Award President (G. Nappi MD,) to Dr. Innocenzo Rainero. GSK Italy has kindly sponsored the Award.